The English Access Micro-scholarship Program that was created by the U.S. Department of State as an International Project aimed at helping teens (13 – 20 years old) from economically disadvantaged backgrounds to have better opportunities in employment, education, and life in general. Access Program promotes skills and knowledge in the English language, as well as giving students the ability to compete and participate in future exchanges and study in the United States. Since its inception in 2004 from the U.S. Department of State, ARO has implemented the Access Program and graduated approximately 600 students in Afghanistan.

The U.S. Congress highly appreciated to Afghanistan Relief Organization for its humanitarian mission during civil-war ravaged country from 1998, Afghanistan. ARO has done commendable and exceptional work in Afghanistan through its compassionate team leaders and volunteers in U.S. The sample of their work has been captured by many local media, such as newspapers and TV news, as well as in the Congress in the United States.

ARO financial support for injury of Emergency hospital in 2012 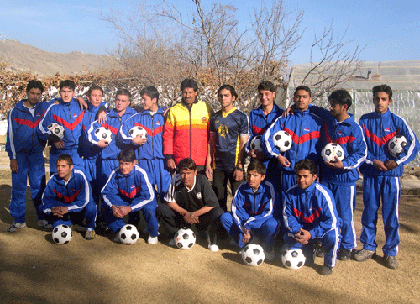 Afghanistan Relief Organization (ARO) is a non-political, non-religious, nonprofit 501(c)(3) humanitarian organization, registered in the United States and in Afghanistan (a requirement of all non governmental organizations working in Afghanistan). We bring people together in a common goal to aid our fellow man. Help Build Hope in Afghanistan!

The Afghanistan Relief Organization (ARO) has worked on relief efforts in Afghanistan since 1998. After late 2001, hundreds of non governmental organizations (NGOs) began arriving in Afghanistan to participate in reconstruction. In 2005, the new Afghan government began a careful review and re-registration process to determine which organizations were contributing programs beneficial to recovery efforts.
In early February 2006, the Afghan government renewed the operating licenses of about 160 NGOs, out of approximately 1600 NGOs that arrived in country in early 2002. By the end of 2007, registered NGOs or PVOs operating in Afghanistan are numbered at approximately 1,000, with a requirement by the government of Afghanistan for formal reporting on project work.
The Afghanistan Relief Organization was the tenth NGO re-registered and remains in good standing. The programs and relief trips by American volunteers have been reported in Orange Coast Magazine, the Orange County Register, CNN, and The LA Weekly, among other publications.
We applaud our volunteers and staff for their hard work and due diligence!

Our continuous humanitarian support from ARO’s donors in Los Angeles in the United States, Mr. Ehsan Khawjzada, who is our committed ARO volunteer and has financially supported to the injured school students incident, happened last week.

ARO humanitarian volunteers highly appreciate and are thankful of their constant Afghan-American friends living in the United States.

We are still welcoming their upcoming helps to the terrible attack on the girls school in Kabul.